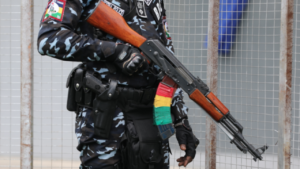 The Office of Nigeria’s Auditor General of the federation reported that over 88 thousand AK-47 rifles have been unaccounted for as of December 2018.

This was disclosed by Nigeria’s Auditor General, Adolphus Aghughu in its weapons review of police armouries, according to Reuters.

This comes at a period of rising criminal activities by violent non-state actors acquiring weapons.

The report stated that multiple weapons were missing and unaccounted for under the Nigerian Police which covered a period till December 2019.

They also warned that there is a serious risk of the weapons ending up in the wrong hands.

The report is set to be presented before the National House of Assembly where the Police is expected to appear to explain themselves.

Recall Nairametrics reported last year that President Muhammadu Buhari approved the establishment of a National Centre for the Control of Small Arms and Light Weapons (NCCSALW), which is part of the ongoing restructuring of Nigeria’s security architecture to address rising threats and strengthen the regional mechanism for the control, prevention and regulation of Small Arms and Light Weapons.

YOU MAY ALSO LIKE:   Details Of How Five Davido’s Crew Members Died In Four Years

Meanwhile, Socioeconomic research firm, SBM Intel reported earlier this year that the proliferation of small arms and light weapons has driven the rise in violence in Nigeria. This violence has led to mass displacement and has resulted in Nigeria having several internally displaced people that rival countries that are officially at war.

YOU MAY ALSO LIKE:   No Going Back On Drug integrity Test For Politicians, Students – NDLEA Boss
AK-47 2022-01-06
society_admin
Share