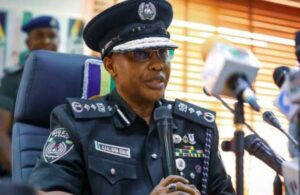 The Osun State Command of the Nigeria Police has warned persons planning to celebrate cultism day on July 7, 2021, that they won’t be allowed to do so.
The Command in a statement in Osogbo by its public relations officer, SP Opalola Yemisi Olawoyin on behalf of the Osun State Commissioner of Police, Olawale Olokode warned such people to shelf their plans or face the consequences.

The statement warned that police and other security operatives in the state won’t allow the planned celebration to hold as it is an unlawful gathering.

The statement further urged parents and guardians to warn their children and wards against participating in any such activities as security operatives have been ordered to reject anything that may threaten the peace of the state.

It however assured law-abiding residents of their safety in the state.

The statement issued on Tuesday reads: “The intelligence that availed the police command revealed that Cultists are planning to mark July 7 2021 to celebrate cultism. In view of this, the Commissioner of police CP Olawale Olokode, psc, warned cultists and other unscrupulous elements in the state to stop the plan or any of such action (s) forthwith.”

“Consequently, the State Police Command, in collaboration with other security agents and local security outfits will not tolerate any unlawful gathering or assembly that will jeopardize the peace of the state as the plan to mark 7/7 may lead to bloodletting and destruction of properties.”

“Therefore, the Commissioner of Police has given marching order to the Area commanders, Divisional Police Officers and Tactical units to be at alert and nip in the bud any act capable of truncating the peace of the state.”

“The CP advised parents and guardians to caution their wards to be law abiding, and desist from any act or unlawful gathering/ assembly before, during and beyond the said date, as the State Police Command will arrest and prosecute defaulters.”

YOU MAY ALSO LIKE:   Oluwo Denies Requesting ₦20M From Oyetola For Wedding

“Also, hoteliers, recreation/ event centres and landlords/landladies are by this announcement warned not to allow their facilities to be used for any cult related activities/meetings, as owners of such facilities are liable for prosecution.”

“The CP advised the good people of the state to go about their lawful daily activities while the Command has taken necessary security measures to forestall any likely breakdown of law and order.”

“Finally, the citizens are urged to be security conscious, vigilant, co-operate and collaborate with the security agents by giving useful, credible and timely information and report any suspicious movement or activities of cultists and other criminals through these numbers: 08039537995 & 08123823981.”

Meanwhile, the lawmaker representing Chikun/Kajuru federal constituency of Kaduna State in the House of Representatives, Yakubu Barde has urged the federal government to legalize guns to allow Nigerians to defend themselves.

Expressing worries about the growing cases of insecurity in the country, the lawmaker suggested that if criminals know that the person they want to attack also has a means of defending himself/herself, they would think twice before launching such an attack.

Barde spoke on Tuesday at a media briefing in Abuja against the backdrop of the recent abductions in Kaduna State.