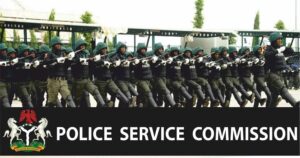 On Monday, the Joint Union Congress of the Police Service Commission (PSC) Chapter commenced an indefinite strike to press home its demands.

The strike kicked off against the backdrop of a purported hijack of the police recruitment exercise by the Force and an allegation of PSC’s complicity with the police authorities to rid staff members of their constitutional duty to recruit prospective officers.

The President of the Union, Adoyi Adoyi, in an interview with THE WHISTLER on Monday, said the shift in mandate gradually falls short of its core reasons for its existence, contained in Part 1, the Third schedule of the 1999 Constitution.

The Union accused the Management of the PSC of nepotism while stating that the situation is stuttering the commission’s growth.

Adoyi said, “There is growing indolence. You know the idle man is the devils’ workshop. People go to work and return; they are not doing anything substantial. The commission is starved of funds; some staff are being owed entitlement as far back as 2012 and 2014, and many have not been paid.

“The commission is pending to a halt. We are suffering the brunt of it all. The condition of the commission staff is poor. Many staff do not have sitting space. No desk, no chair. There is an ongoing site of the commission which has not been completed for reasons that have been very difficult to understand.

“The commission is saddled with the responsibility of oversight function, recruitment, promotion, discipline, populating policies and those items are not capitalised. The commission, by nature, is supposed to be operating on a first-line charge,e but it lives on envelop budget which is hardly enough every month.

YOU MAY ALSO LIKE:   Ooni, Agbaje, Olujimi, Other Yoruba Leaders Meet Over Sunday Igboho's Arrest

When asked how it affects the members of staff of the commission, he replied, “It is killing our morale, you cannot talk about a good experience on the job. We are desirous at making the place work for Nigerians first, then for ourselves, because we will become victims of the charge of the insecurity and all social ills you see when we do not carry out our functions. We will become an accomplice, meanwhile, we are all suffering the brunt of its all.”

Aside from the recruitment saga, which has remained the crux of the disagreement between both parties, Adoyi demanded that the PSC responds appropriately to the “provocative and insensitive” comments of the Police PRO, CSP Olumuyiwa Adejobi during a live broadcast.

YOU MAY ALSO LIKE:   BREAKING: Trouble Looms As NURTW Suspends MC Oluomo Indefinitely

Recall that the Police Spokesperson had asked that Nigerians disregarded the call of the PSC to apply through the commission’s portal for police constables.

The Police claimed that it could not train new intakes, and the commission had failed to carry the Force along in the process.

But, Adoyi reiterated his displeasure over the response of the PSC towards the Police comment, noting that the commission’s statement, “left us neither here nor there, interpreted by the media to mean that the commission has poured to IG’s pressure and capitulated”.

He added, “And it is coming against the backdrop that several other infractions are being committed which staff are aware. Staff have been complaining. There is a police recruitment exercise ongoing at the Police Academy in Kano.

“It is the process of recruiting Cadet officers at the level of ASP. As we speak, it is ongoing and the commission is not involved meanwhile there is a court judgment of the Appeal Court.”

Adoni noted that the long rift between the PSC and the Police is an ego war, and it was pertinent for the latter to understand that people manning guns, especially as a civil force needs to subject themselves to civil authority.

The civil authority, he noted, is exercised by the President through the Police Commission.

“The easy quest of the Police authorities to kick against that is nothing but a kick-off to anarchy,” Adoni said.

He added, “You see the police suffer a lot to maintain internal security, there is a shortage of manpower. People are supposed to be recruited regularly, the commission is also administrative support of the police and the same police wants to take away the attention from internal security and come into issues that are supposed to be purely administrative”.

The disagreement between the PSC and the Police backdates to 2019 following President Muhammadu Buhari’s call to recruit at least 10,000 Constables into the Police Force.

The mandate, which constitutionally falls on the PSC to execute, turned cold war when the police on the grounds of Section 21 of the Police Act, as appealed insisted they had the right to be involved in the recruitment process since they do not only determine the criteria for entry but train them into prospective officers.

However, legal practitioners have noted that any law that contradicts the 1999 constitution as amended is null and void.

Previous Buratai Calls On UN To End Global Conflicts As He Becomes First Bearer of Security Torch Worldwide
Next 2023 Budget: We will Need to Borrow over N7trillion to Pay Petrol Subsidy – Minster of Finance