Police Vs Motorcyclists Clash: Lagos Task Force Disowns Slain Officer, Says He’s Not One Of Them 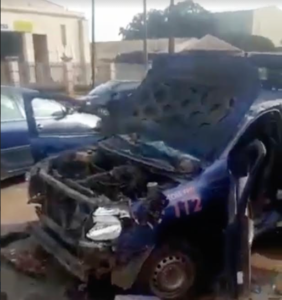 Police Vs Motorcyclists Clash: Lagos Task Force Disowns Slain Officer, Says He’s Not One Of Them

The Lagos State Environmental and Special Offences Unit, also known as Lagos Taskforce has refuted claims that they were involved in any clash with motorcyclists around Ajao Estate, Lagos today Thursday, 23rd of September, 2021.

This is coming some hours after reports had it that operatives of the task force and motorcyclists had a serious clash which led to the death of an officer who was gruesomely killed, and injury of many others.

In a telephone conversation with the Public relations officer, Mr Femi Moliki, it was confirmed to TRIXX NG that the police officers involved in this clash are not from the Task force division but the metro police unit of the Lagos police command.

He shared a video with this medium, and explained that the task force unit has a branded vehicle and that the officers have their uniform which is different from that of the metro police.

Checks by TRIXX NG also confirmed that the police vehicles contained in the video has no inscription of the Task force unit neither was the slain officer dressed as an operative of the task force unit of the Lagos state police.

However, as at the time of filing this report, the Lagos state command is yet to make an official statement.

YOU MAY ALSO LIKE:   My Life As An Actress- US Based Nollywood Actress, Toyin Haastrup Bares It All
Police Vs Motorcyclists Clash: Lagos Task Force Disowns Slain Officer Says He's Not One Of Them 2021-09-24
Oluwasegun Adesuyi
Share