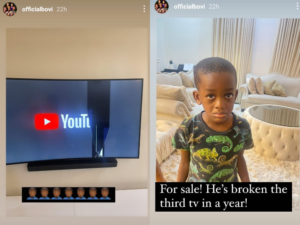 Popular Nigerian Comedian, Bovi Ugboma, has announced that his last son, Chuchu, is now ‘for sale’.

The comedian simply known as Bovi in his usual funny manner speaking via his Instagram account said he wants to sale his son after he broke the third television set in the house under one year.

Bovi then shared the pictures of how his son broke the television.

One of the pictures read, “For sale! He broke the third TV in a year.”

Chuchu is the third of Bovi’s children, 14 years after the comedian got married to his wife Kris.

Previous ABUAD Ranks Best Private University In Nigeria
Next I Am Tired Of Praying For Buhari, He’s Been Lying To Nigerians – Muslim Cleric