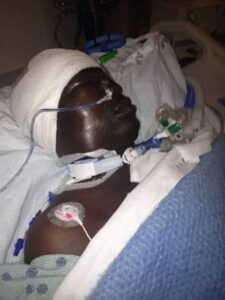 Jean-Pierre Adams, a French professional footballer who has been in coma since March 1982 has died, aged 73.

Adams’ death was recorded on Monday 6 September 2021 in Nimes France.

The late athlete who was born in Dakar Senegal, played as a centre-back for the likes of PSG and OGC Nice.

Adams was 34 when he slipped into a deep coma in 1982 following an anesthesia error during routine knee surgery at Lyon Hospital.

He was said to have been in ‘great shape’ going into the operation and was expected to wake up after only a few hours. But Adams remained in the coma for 39 years.

His wonderful wife, Bernadette had tended to him ever since he went into coma, barely missing a day’s care over the last three decades.