Portable, promoter in war of words 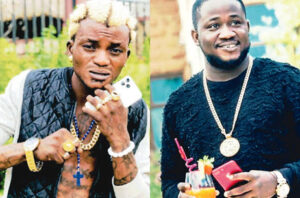 Rave singer, Portable and his former promoter, Kogbagidi, have taken to social media to throw subtle shade at each other after a public fallout.

He wrote: “ Don’t wrestle with a pig in the mud, you will both get dirty but the pig likes it. If you are born in the mud you are gonna be dirty and people don’t understand that. Not only do we live among stars, not only do we make stars, stars live within us.”

The Zazu singer was seen at rapper Phyno’s house recently with other stars including Timaya, Peruzzi, Jude ‘Engees’ Okoye, Danku and a host of others.

Last week, a viral video hit the internet with Portable seen in a heated argument with his former boss.

In the video, Portable was seen verbally attacking Kogbagidi as he accused him of ripping him off.

He also alleged that Kogbagidi made a lot of money off him but never gave him his deserved share.

YOU MAY ALSO LIKE:   BREAKING: “You forged your School Certificate” – Soludo attacks Ubah during Debate

The two have since reportedly parted ways and unfollowed each other on social media.