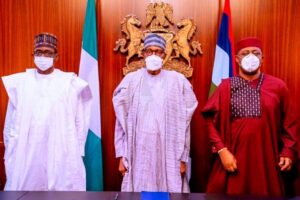 President Muhammadu Buhari-led government is planning to drop the corruption charges against the former Minister of Aviation, Femi Fani-Kayode following his defection to the All Progressives Congress.

According to Sahara Reporters, a source disclosed that the ruling party and the president are also planning to make Fani-Kayode a minister.

The source, while speaking on the defection of the former minister, said, “They are working on dropping corruption charges against Fani-Kayode and making him a minister.”

However, it was not stated the ministry which the Buhari administration is planning to give the former minister.

Naija News had earlier reported that Fani-Kayode on Thursday met with President Buhari and the Interim Chairman of the APC, and governor of Yobe State, Mai Mala Buni at the Presidential Villa, Abuja.

Fani-Kayode while giving the reason for dumping the Peoples Democratic Party said he joined the APC to help unite the country.

There are speculations that Fani-Kayode dumped the main opposition party for the ruling party because of his corruption cases with the Economic and Financial Crimes Commission (EFCC).

YOU MAY ALSO LIKE:   FirstBank: Empowering Staff; Driving Productivity against the Odds By Segun Adams

Recall that Fani-Kayode was arraigned in 2016 alongside a former Minister of State for Finance, Nenadi Usman; Danjuma Yusuf, and a firm, Joint Trust Dimensions Ltd over N4.9bn alleged fraud.

Fani-Kayode who was the spokesman of the Goodluck Jonathan’s presidential campaign organisation for the 2015 election was accused of conspiring with the others to, directly and indirectly, retain various sums which the EFCC claimed they ought to have reasonably known were proceeds of crime.

YOU MAY ALSO LIKE:   Our Soldiers are not Involved in Gold Mining - Army

The anti-graft agency had accused them of conspiring among themselves to “indirectly retain the sum of N1,500,000,000.00, which sum you reasonably ought to have known forms part of the proceeds of an unlawful act to wit: stealing.”

Fani-Kayode was accused of directly using part of the money at various times.

He was also accused of making a cash transaction of N24 million to one Olubode Oke, said to still be at large, on February 12, 2015 “to Paste Poster Co of 125, Lewis Street, Lagos Island”.

YOU MAY ALSO LIKE:   Primate Ayodele Pays Prophet Joshua Iginla A Condolence Visit In Abuja

The duo was said to have made the transaction without going through any financial institution, an act the EFCC claimed was contrary to sections 1(a) and 16(d) of the Money Laundering (Prohibition) (Amendment) Act, 2012, and punishable under Section 16(2)(b) of the same Act.

The former minister months later was rearrested and arraigned on five counts bordering on money laundering to the tune of N26 million.

According to the EFCC, Fani-Kayode allegedly received the sum of N26 million from the office of the former National Security Adviser (ONSA), Col. Sambo Dasuki (retd.) in 2014.

There had been reports that political office holders join the ruling party to escape corruption charges levelled against them.