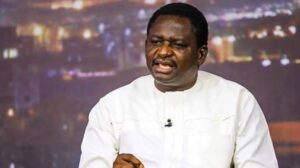 Society gazette reports that the President’s aide on media and publicity, Femi Adesina has landed in fresh crisis with Nigerians after calling President Muhammadu Buhari a kind bully over his statement on terrorism in the south east.

President Buhari had said he will go hard on those causing mayhem in south east due to the recent attacks that has rocked that region.

Shortly after making this statement, it was referred to as genocidal threat because the president reference the civil war regime that claimed the lives of many eastern citizens some years ago. Due to the outcry, the president’s tweet was deleted by twitter.

In his defence, Femi Adesina who admitted that Buhari was a bully expressed his pride in the president for his statement.

Femi Adesina is a buffoon. A conscienceless lickspittle who has sold his own den the river for filthy lucre and the rotten trappings of his sleazy office. https://t.co/aHXOixdv5Q

Buhari’s bestie is a weirdo I tell you! #Elon Mi Abaga pic.twitter.com/yPQM3ldAea

I wasn’t expecting this high level of stupidity in @FemAdesina. So anyone can still think that any amount of threats can stop us!?Only the sophisticated morons do. https://t.co/GHvYB7sRAn

YOU MAY ALSO LIKE:   Talking about Buhari's Government is not good for my Sanity - Wole Soyinka

After this Arise TV interview, it is clear that threats without concrete actions wont ever work. We will never ever listen to excuses again. Femi Adesina should just keep quiet abeg.

Where is Lai Muhammed, Garba Shehu and Femi Adesina???

Those Incompetent people will not see this and speak about it. Nonsense people who have no business holding power. https://t.co/lQhclt57wG