Producer Of The Wizard, Bola Onifade Reveals Her Winning Strategies 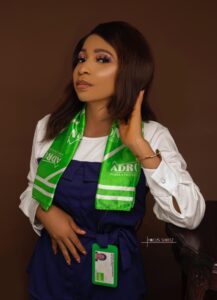 Born and need in the ancient city of Abeokuta in Ogun State, she had her primary and secondary education there before proceeding to the Polytechnic Ibadan in 2015 for her National Diploma as an Estate Surveyor and Valuation. And currently doing her HND in same institution.

Responding to her sojourn into Nollywood she said it all began from the church.

“My acting history started when I was still a very young child in the church, CHRIST APOSTOLIC CHURCH. Because I love to work for GOD and love to get noticed and also love to display my talent for people to see and love me.
When I noticed my passion for acting, I proceeded to a acting school( GOSHEN UNIVERSAL_academia) which is the academic institute of Oreofe films and theatre productions company Nigeria . In year 2010, I
was certified in theatre and films production in year 2012

Professionally, I started to chase my career in Nollywood in 2015 when I joined BWEALTH FILMS PRODUCTION owned by a Yoruba actress Biola Adekunle in Abeokuta.”

The sexy actress became a producer when she produced her own movie known as The Wizard in 2019. It was Premiered in 2020 on YouTube via Libra TV channel.

“My first production was THE WIZARD. It talks about a young child with a special power from birth”.

According to her, her mentors are Dr Oreofe Williams , Miss Bola Solate ,Mrs Ojo Judith , Bello GBolagade and her late father, Onifade Adekunle.

YOU MAY ALSO LIKE:   Just In: Tension As Security Operatives Seals Plateau House Of Assembly Complex

Interestingly, aside acting she is also a realtor and works for the popular Adron homes and property. She joined them in 2017 at Ibadan as their Business Manager in Real Estate and has won awards of best staff countless number of times and has a lot of client cabals.

Confessing her winning strategies, she said faith in God, dedication and self development have been her winning ways.