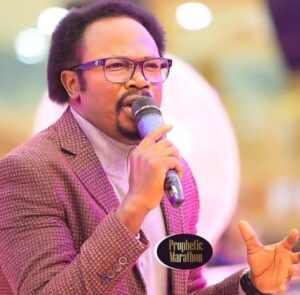 How do you know a true man of God or a prophet to the nation? Its when his message comes to fulfilment! Interestingly, the prophetic message of Prophet Joshua Iginla concerning the emergence of Ashiwaju Ahmed Bola Tinubu as the APC presidential flagbearer has been confirmed.

The clergy with the prophetic mantle, Abuja-based General Overseer of Royal Champions Assembly, Prophet Joshua Iginla has said, only God can stop Tinubu’s presidential ambition and that he is a major factor in the equation of things in the ruling party.

The clergyman during his prophetic release for 2022 said God told him Tinubu will be a great factor in the forthcoming 2023 election. “God said something to me that is very deep. The man called Bola Ahmed Tinubu is a factor in the equation and you can not remove him and you cannot push him aside. You cannot drive him backward or push him aside, except God pull him out of the equation. You cannot remove him by human means. If you push him aside, you will know that a factor has been removed from the equation, the only thing that can move him is God. Only God stops him. I’m not speaking in favor of anybody but I’m saying what I’ve seen and will leave the rest for God,” Prophet Iginla said.

YOU MAY ALSO LIKE:   2023: I Don’t Care Who Becomes President…My Preferred Candidate May Be Eliminated — Buhari’s Confusing Position On Successor

And of a truth, the road to Victory for Tinubu in the just concluded APC primaries was tarred with twists and turns. It was a journey filled with betrayals from loyalists. At a point, his Victory looks like a mirage but the message of the clergy keeps resounding clearly that Tinubu is the major factor in the equation.

YOU MAY ALSO LIKE:   Femi Fani-Kayode Visit Joshua Iginla, Describes Him As End-Time Gods General

And true to his prophetic message, the National Leader of the All Progressives Congress, Bola Tinubu, has emerged as the winner of the party’s presidential primary.

YOU MAY ALSO LIKE:   Former French Midfielder Samir Nasri Retires From Football

They asked their supporters to vote for Tinubu, just as the only female aspirant, Mrs Uju Ken-Ohanenye, followed suit.