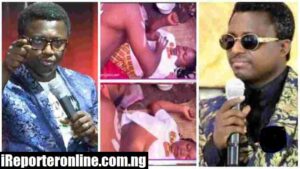 Ghanaian Prophet Opambour Adarkwah Yiadom, the founder and leader of Ebenezer Miracle Worship Centre, is in trouble over some p*rnographic contents shown on his television channel.

Prophet Opambour has been tasked by the Film Classification Committee (FCC) to provide documents for all his in-house content by the close of Monday, September 10.

YOU MAY ALSO LIKE:   Obaseki’s Intolerant and Sadistic Leadership By Yakub Mohammad

This is after some p*rn0graphic contents shown on his Prophet One TV caught the attention of the management of FCC.

In a letter served to him, FCC stated that Prophet Opambour, while hosting his show, displayed s3xual scenes between a fetish priest and a person purported to be a client.

This, the Committee said, is content that is not appropriate for free-to-air television.

The man of God is liable to facing punishments in accordance with the Offence and Penalties Act in Section 27 of the Development and Classification of Films Act 935.

Below is a copy of the letter served on the television station by the National Film Authority.

Watch the video below :