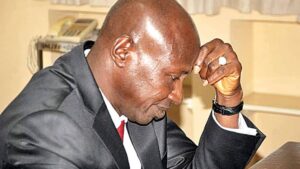 According to TheCable, the PSC wants to promote Magu to the rank of assistant inspector-general (AIG).

But the Presidency is said to be worried about the “defiance” of PSC which may create the impression that Ibrahim Magu is being rewarded despite the damning report by a presidential panel on him.

Magu, who was promoted to commissioner of police in 2018, had been recommended for removal as EFCC boss by the Justice Ayo Salami panel, which also asked that he be prosecuted over allegations of abuse of office.

The panel had specifically recommended that Magu should be removed “for failing to properly account for N431,000,000.00 security votes/information fund released to the office of the Executive Chairman of EFCC between November 2015 and May 2020”.

He was also accused of causing “disappearance of evidence, stoppage and suppression of cases under investigation and prosecution, and omitting to arrest suspects” in cases involving a former deputy senate president and a former MD of Pipelines and Product Marketing Company (PPMC).

The panel recommended that Magu should be referred to the inspector-general of police for “necessary disciplinary action”.

However, since the panel submitted the report in November 2020, only a few of the recommendations have been implemented.

A new chairman, Abdulrasheed Bawa, was appointed in February 2021 while several police officers were recalled to the headquarters.

Magu, who has been in limbo since his probe by the panel, is believed to be in the good books of the PSC chairman, Musiliu Smith, a former inspector-general of police from Lagos state.