Qatar 2022: Resilient Eagles came from behind to Defeat Cape Verde 2-1 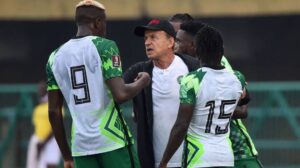 Qatar 2022: Resilient Eagles came from behind to Defeat Cape Verde 2-1

Nigeria’s Super Eagles, on Tuesday, came from a goal down to defeat Cape Verde 2-1 in a FIFA World Cup Qatar 2022 qualifier. And they did it without the core of the players that prosecuted last week’s 2-0 win over Liberia.

The Nigerian team left Lagos without eight of the players that featured in the 2-0 defeat of Liberia on Friday. They were Alex Iwobi, William Troost-Ekong, Peter Etebo, Joe Aribo, Wilfred Ndidi, Ola Aina, Leon Balogun and Kelechi Iheanacho, who are all based in Britain.

Cape Verde is among countries in Britain’s COVID-19 red zone and players for clubs in the United Kingdom are barred from travelling to such countries.

But their absence only prevented the Super Eagles from securing a more comfortable win on the uneven artificial playing surface in Cape Verde that made the game much closer than it should have been.

It even appeared too close for comfort for the Super Eagles after Dylan Tavares put the Blue Sharks ahead after 20 minutes from what television replays showed ought to have been offside. The Moroccan match officials failed to spot it though.

However, the Super Eagles shrugged off the disappointment of conceding their first goal of the qualifiers to pull level 10 minutes later through Victor Osimhen, following a goal mouth scramble.

A sensational Rocha Santos own-goal – a lofted ball from just inside the Cape Verde half that sailed over the Sharks goalkeeper – 15 minutes from the end however sealed all three points for the Super Eagles.

YOU MAY ALSO LIKE:   Prophet Joshua Iginla's Birthday: The Celebration of an epitome of God’s Vision, Mission and Passion

The win in Cape Verde means Gernot Rohr’s side remain top of Group C, on six points, three points ahead of second-placed Liberia after two rounds of matches.

The Sharks of Cape Verde lie in third spot with a solitary point, same as Central African Republic from the same number of games.

YOU MAY ALSO LIKE:   Gunmen Strike Again In Plateau State, Kill 5, Abduct Four Others in Fresh Attack
Qatar 2022: Resilient Eagles came from behind to Defeat Cape Verde 2-1 2021-09-07
Oluwasegun Adesuyi
Share