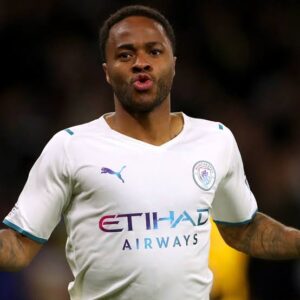 Raheem Sterling has completed a £45m transfer to Chelsea FC and hopes to continue his success in the London club.

The 27-year-old signed a five-year contract at Stamford Bridge with the option of another 12 months.

He becomes the first signing of Thomas Tuchel after the takeover of Chelsea by Todd Boehly.

Sterling said, “I’ve obviously achieved a lot in my career so far, but there is still so much more to achieve and I’m really looking forward to doing that in a Chelsea shirt, under Thomas’ management.

“London is my home and where it all started for me, and it’s amazing I now have the opportunity to play in front of friends and family week in, week out at Stamford Bridge. I’m really looking forward to meeting the fans there soon.

“I can’t wait to get going now and continue to do my talking on the pitch.”

In a statement on his Twiter he said, ‘Seven seasons. Eleven major trophies. A lifetime of memories. To the coaching staff who have played a massive role in my development over the years, to my teammates who have become more than just those I share a pitch with, to the office staff, to the fans who have tirelessly supported the team. And to everyone involved with Manchester City. My respect for you couldn’t be greater.

“What a ride it’s been. I am thankful for the ups and the downs, as it’s downs that have, at times, tested my strength and resolve and enabled me to stand here in front of you as the best possible version of myself.

YOU MAY ALSO LIKE:   UBA Promises to Put Customers' Needs First as it Holds 2019 Forum in Lagos

“I arrived in Manchester as a 20-year-old. Today, I leave as a man. Thank you for your endless support. It’s been an honour to wear the shirt of Manchester City.”

Chelsea co-owner and chairman Todd Boehly said: “Raheem Sterling is a serial winner and his signing is an important step in strengthening our squad. We are delighted for Raheem to return to London with Chelsea, and we look forward to seeing his world-class talent on display at Stamford Bridge.”