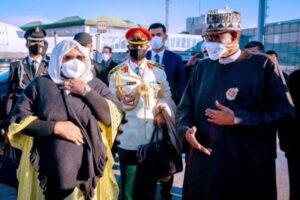 Recent photos of Nigeria’s first lady, Aisha Buhari has sparked controversy on social media, as Nigerians claim she is expecting a child.

In one of the photos making the rounds on social media, Aisha was spotted alongside her husband, while being surrounded by security officials.

One of the security officials was carrying her handbag, as the first lady who rocked a yellow lace kaftan seemed pregnant.

She wore a black shawl draped over what appeared like a baby bump, which she placed her right hand on.

YOU MAY ALSO LIKE:   "I Can't Wait to Legally Murder Tyson Fury in Las Vegas" - Deontay Wilder Drops New Threat Ahead of Trilogy Clash

Another image showed the couple inside a plane. A zoom-in on Aisha’s physical look revealed a full face like that of a pregnant woman, different from her usual robust look.

Aisha Buhari has been away from the public for months. Before her daughter’s wedding in September 2020, she was out of the country for a couple of months and there were claims she had relocated to Dubai in the United Arab Emirates.