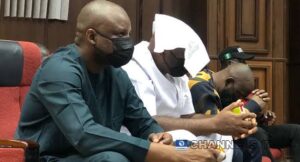 Nigerians have commended the National Drug Law Enforcement Agency (NDLEA) for arraigning embattled Deputy Commissioner of Police, Abba Kyari, and six others over drug trafficking-related offences.
Naija News reports that the suspects were brought to the Federal High Court in Abuja on Monday by officials of the anti-narcotics agency.

YOU MAY ALSO LIKE:   COVID-19: FIRSTBANK LAUNCHES NEXT-GENERATION ATM

The suspects were brought into the courtroom around 8am in two batches by armed operatives of the NDLEA.

The NDLEA had filed eight counts of hard drug trafficking against Kyari, who is also wanted in the United States for his relationship with the convicted fraudster, Ramon ‘Hushpuppi’ Abass.

Nigerians have taken to social media to express their views on the arraignment of the suspended commander of the Intelligence Response Team (IRT) and six other suspects.

Below are some of Nigerians’ reactions:

@BillionaireAff1 wrote: “Why are they hiding their faces? They should raise their head oh, let’s know them well.”

@Captainadey wrote: “Please why is he (are they) not in handcuffs, abi eye dey pain me ni.”

@Okenwahenry2 wrote: “They should fast hand them over to FBI.”

@ToniChukwuiwu wrote: “Let me know when they finally convict him.”

@Godseagle3ugo wrote: “Kyari must end up in jail he’s nothing but a mere criminal in a police uniform….messed up, super cop

@_chukwudi5 wrote: “Why are they putting on new clothes? Are they going to the fashion parade

@OlakunleOlaDoy1 wrote: “No handcuffs and still using expensive wristwatch and with latest native attire. Hopes this is not a seasoned film.“