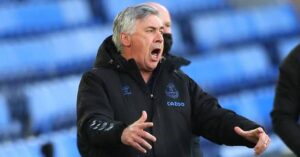 Spanish giants Real Madrid who have been UEFA Champions League Champions for most times in Europe sacked their manager and former player Zinedine Zidane a few days ago. Today, they’ve gone ahead and appointed former Chelsea manager their new head coach.
Carlo Ancelotti is the new manager of Real Madrid in a surprise move by the club that was not expected at all. Ancelotti has been manager of Real Madrid before and this will be his second stint at the club.

Real Madrid performed dismally in the last season finishing second in the Spanish La Liga. They fell to their City counterparts Atletico Madrid who went on to win the League despite some last minute scares.

Ancelotti will be looking to make the Spanish giants champions again as they’ve not been great since Ronaldo left for Juventus. Many await to see what kind of change he will bring to Real Madrid.