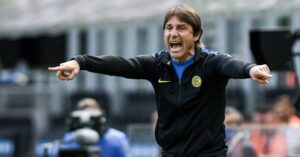 Antonio Conte is being considered as Zinedine Zidane’s successor at Real Madrid after they missed out on first-choice Max Allegri, according to Sky in Italy.

After Zinedine Zidane stepped down from the Bernabeu for a second time this week, the Spanish giants had been hoping to appoint long-term target Allegri – but he is set for a sensational return to Juventus to replace Andrea Pirlo.

They have now turned to Conte, who is a free agent after parting company Inter Milan on Wednesday despite leading them to the Serie A title, due to a need to make significant financial cuts.

How the European Super League was doomed to fail
Bale, Real talks on hold until after Euros
Conte is a prolific title-winner with Juventus himself, as well as Chelsea and this season Inter.

Allegri’s agent was in Madrid on Tuesday but, for the second time in his career, he has turned Real down in favour of a second spell with his former club.

Spanish football journalist Alvaro Montero says Zinedine Zidane is ‘unpredictable’ after he stepped down as Real Madrid head coach for the second time
Ex-Juventus star Zidane called time on his second spell in charge of the La Liga club after failing to win a trophy this season, following two league titles and three Champions League victories since he began his first spell at the helm in 2015.

Zidane told club directors and the first-team squad of his decision on Wednesday and finalised his exit at Real’s Valdebebas training complex on Thursday.