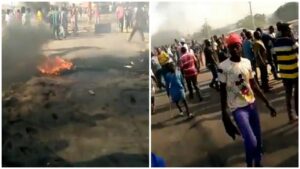 Residents at Tarfa Local Government of Niger state, are currently protesting after 15 young people were kidnapped by suspected unknown bandits. According to a source, the operation lasted for 1 hour and 30 minutes, despite the fact that police station and Army barracks are close to area.

According to the source, police and army officers weren’t seen at the scene of the operation from the unknown bandits.

Angry youths have blocked Gauraka Abuja-Kaduna highway along Tarfa Local Government with bonfires, stones and long sticks to protest constant kidnaps of people. According to the eyewitness, a Hilux belonging to Army has been blocked from getting into the protesting zone.

Previous Fiancée To Late NAF Pilot Pens Down Emotional Tribute
Next Senate Queries NECO over Alleged Award of N6.5bn Contracts Without Due Process