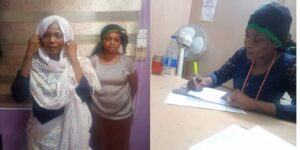 The Nigeria Police Force has revealed the identity of the professor who brutalised her orderly in the Garki area of the Federal Capital Territory (FCT) as Professor Zainab Duke-Abiola.

Checks by THE WHISTLER also showed that Duke-Abiola, the Chairperson of the Akasoba Centre for Peace and Conflict Resolution (ACPCR), is the widow of the late Chief MKO Abiola.

Information obtained from her Facebook page also described her as Her Royal Highness, The Akasoba of Kalabari.

The police in a series of tweets shared a photo showing Zainab, a legal practitioner and human rights activist, and her domestic staff writing a statement after their arrest.

The Police disclosed that the incident occurred on Tuesday following the refusal of the orderly, Inspector Teju Moses to carry out menial and domestic chores at her residence, which contravenes her professional ethics.

The statement said, “The IGP has directed the express prosecution of the arrested suspects who are currently in Police custody, as the preliminary investigation shows overwhelming evidence of culpability on the part of the Professor and her domestic staff.

“The IGP has equally tasked the investigative team to ensure that the fleeing suspect is arrested and made to face the wrath of the law.”

THE WHISTLER observed that Nigerians had demanded evidence of her arrest following the Police Public Relations Officer (PRO), CSP Olumuyiwa Adejobi’s reaction to the incident earlier on Thursday.

YOU MAY ALSO LIKE:   Deontay Wilder Handed Six Months Ban After Defeat To Tyson Fury

The PRO said, “Assault on woman police: We have arrested the woman professor and her staff since the date of the incident, the matter is getting the necessary attention it deserves. FCT Command will charge d case to court asap. It is condemned in totality. We will still update you shortly.”

YOU MAY ALSO LIKE:   BREAKING: Violent Clash Erupts In Lagos Between Police, Okada Riders Over Ban (Video)

But his reaction held no grounds for many Nigerians on Twitter who believed that the police should maintain its standard of transparency, since previous arrests of civilians assaulting police officers, were made public.

Zainab was shown in a viral video on Wednesday where her orderly, in a pool of blood accused her of instructing her maids to beat her up, and her men to kill her.

Background voices in the video claimed that Zainab had such impudence due to her relationship with the IGP’s family, but the police countered it.

The Police said, “It is pertinent to clarify that the suspect, Prof. Zainab, who name-drops the IGP, his family members, and other officers in the top hierarchy of the Force has no acquaintance with the Police in any form as erroneously peddled on social media.

“The Inspector-General of Police who similarly ordered the withdrawal of all Police personnel attached to the Professor expressed consternation at the fact that an individual who claims to be an advocate for Human Rights could stoop so low to violate the rights of another individual, a police officer tasked with ensuring her protection.”