Home / News / Opinion / ROCHAS OKOROCHA: THE TRIAL OF A SAGE

ROCHAS OKOROCHA: THE TRIAL OF A SAGE 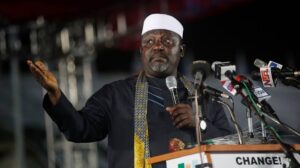 The unsavoury incidents being sponsored by some unscrupulous state actors involving the former Governor of Imo State, Sen. Rochas Okorocha in recent times show a hint at some parties’ thought who see him as a threat to their supposed caliphate. Indeed, it has proven right the Elders’ words which postulate that ‘uneasy lies the head that wears the crown’.

However, the Sage’s head still feels uneasy despite leaving office.

Does that still mean Okorocha wears the crown, holds the ace or the nitwits are scared of losing their hegemony to who God has chosen to make Imo prosper again?

This unwarranted battle began after the current Administration was sworn in on 15th January, 2020. It was a public knowledge that the Sage was a constant emotional backup when Uzodinma was struggling for his mandate after the 9th March, 2019 governorship election. Okorocha was among the foremost political figures to congratulate him when he finally triumphed at the Supreme Court. It is now bemusing that this same Governor is having no one to pick as a foe apart from Rochas Okorocha, the man who has been in his shoes and can offer him Fatherly counsel considering how well he fared after occupying the seat for eight years.

Prior to this, there have been silent battles fought underneath but the latest showed how low the current administration’s moral has sunk. In my part of the world, the prince does not fight like slaves. You can’t be at the helms of affair and still be ‘terrorising’ your subjects. As a child of necessity, Imolites expect more lease of life from Uzodinma than the current drama that is playing out.

His intent was simply to inquire the reason behind the sealing and take due protocol as a law-abiding, serving Senator of Federal Republic of Nigeria.

Unfortunately, Chinansa Nwaneri, the Special Adviser to Governor Hope Uzodinma on Special Duties and Eric Uwakwe saw no need for peace as they led a pool of miscreants and abused public office by using the state’s police for their personal gain. The gadgets and equipment necessary for the smooth running of the Resorts were all carted away by the opposing forces. They also attacked Okorocha and his crew violently without provocation

As at now, Uzo Anwuka, one of Okorocha’s sons-in-law is currently receiving treatment after being shot at on the spot where the state sponsored violence took place while Okorocha, a serving Senator representing Imo West is currently apprehended, detained and was only released on the order of the Presidency. Just wondering, if the hired thugs had murdered the distinguished senator in the process of that needless fracas, what side of history would Governor Hope Uzodinma be?

Prior to this, Okorocha has silently suffered series of blackmail and name-calling along with destruction of properties belonging to him and his family. This hostility is not unconnected to the influence which he can pull in the state when the 2023 Presidential election come knocking.

However, a threat to life is totally uncalled for as Okorocha’s Camp can never engage in do-or-die politics. Destroying the legacy you have built with your sweat is not an option in modern democracy.

YOU MAY ALSO LIKE:   How We Derived APC's Change Slogan - Akande Opens Up

It must be mentioned that armed thugs attacked Okorocha’s residence at Akachi three days before he went to the sealed hotel belonging to his wife, Nneoma Rochas in Owerri.

It should further be stated here that before this ugly incident, the demolition of the hospital complex belonging to the Okorocha’s family had sent many Imolites to the unemployment market and this is quite disheartening in view of the current state of the nation’s economy.

Irrespective of what anyone may think, it is highly condemnable that a former Governor and sitting Senator could be treated this way by those who see political power as the beginning and end of life.

It is therefore important to call on the general public and Mr. President to ensure the safety of all citizens and curb the abuse of office. The safety of Okorocha is very crucial to political stability of Imo State and any further attack will be regarded as a deliberate assassination attempt upon which proper actions will be taken.