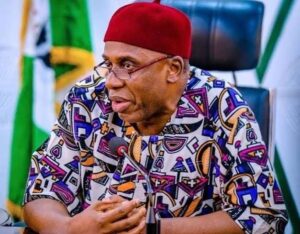 Amaechi said, “I stand before you today to declare my intention and submit my application to serve as your next President.

YOU MAY ALSO LIKE:   Trouble As ‘Mentally ill’ Man Stabs Pedestrian Over Money In Port Harcourt

“I did not come to this decision lightly. I have served as Minister of Transportation, Governor for eight years and another eight years as Speaker.

“I have served as Director General of President Muhammadu Buhari campaing twice.

“I am well equiped for the presidency and have compassion for Nigeria.”

“I am compelled to place my experience and proven capacity for the service of the nation at the highest level,” Amaechi added.

He stated that Buhari government had planted trees for the growth of Nigerians future.

Rotimi Amaechi and his wife

With Amaechi’s declaration, he would be contesting for the ticket of the ruling party against APC national leader Bola Ahmed Tinubu, Governor Yahaya Bello of Kogi State, Senator Orji Uzor Kalu, Governor David Umahi of Ebonyi State amongst others.