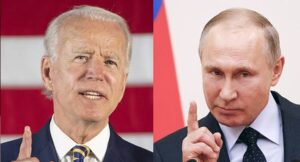 President of the United States, Joe Biden has taken fresh steps in the war between Russia and Ukraine.
Society gazette reports that Russia has been unleashing terror attacks on Ukraine since Thursday and over a hundred citizens of the country have been killed.

However, despite a warning by Russian President Vladimir Putin that no world leader, or nation should intervene in the ongoing war, President Biden on Saturday instructed State Department to release the sum of $600m (£448m) in “immediate military assistance’’ to Ukraine.

YOU MAY ALSO LIKE:   NURTW queries Oluomo over alleged insubordination, anti-union activities

The Democrat instructed the secretary of state Antony Blinken to release up to $350m “in defence articles and services of the Department of Defense, and military education and training” under the Foreign Assistance Act of 1961.

The remaining 250m would be for “overall assistance”, according to the memo released by the White House, Naija News understands.

The order comes after a call between Mr Biden and Ukrainian president Volodymyr Zelensky spoke about strengthening sanctions against Russia and providing defence assistance to Kyiv.

Naija News understands that residents of Ukraine have been fleeing to neighbouring countries since Thursday after the Russian army began to invade their home country.

YOU MAY ALSO LIKE:   Shake up in presidency as Buhari sacks First Lady’s aide

The Russian troops reached Kyiv early on Saturday morning, attacking a military base in the city, as well as attempting to capture an electricity generation station.