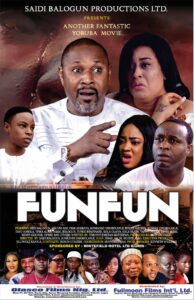 The two-in- one movie thrive on the lesson that parents are the ultimate role models for children. It was produced and directed by the Ibadan born talented role interpreter himself. Giving details about ‘Funfun,’ Balogun said ”Every words, movement and action come with effect on the children. No other person or outside force has greater influence on the child than the parents”

Saidi Balogun, a name to reckon with in the industry with well over 30years experience, the mulit-talented Actor and singer has produced a lot of  movies in recent time like Eti Keta,You or I and Modupetemi.

He is also reputed as the first and only African man to produce a two cast movie in Africa. He is out this time with what priviledged industry watchers have labeled a powerful blockbuster.

FUNFUN (Purity) shot in different towns and cities in Nigeria is ready to hit individual home screens this August. The movie which was bankrolled by Whitefield Hotels Ilorin will be Marketed and distributed by Olasco Films and will be released in Yoruba and English on DVD by August 10, 2020 while it will come alive on YouTube ApataTv on August 11, 2020.