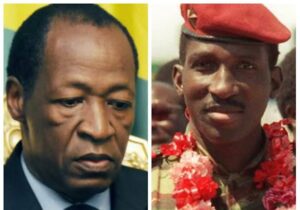 Former Burkina Faso President, Blaise Compaore has been handed life imprisonment over the alleged murder of his predecessor, Thomas Sankara.

Records have it that Compaore assassinated Sankara who was the first Burkinabe president during a coup on October 15, 1987.

The case had lingered for decades until today when a verdict was delivered in absentia of Campaore.

Naija News understands that it is 35 years already since Sankara was killed, he, however, remains one of the iconic figures in West Africa for his sweeping socialist figures and speeches.

He is called the “African Che Guevara”, referring to the Marxist revolutionary and one of the icons of the Cuban Revolution.

He changed the name of the former French colony from Upper Volta to Burkina Faso, which means “the land of the upright”.

It was gathered that military prosecutors in Burkina Faso’s capital, Ouagadougou, had requested a 30-year sentence for Compaoré, who was being tried alongside 13 others.

YOU MAY ALSO LIKE:   Three Youths Arrested With Human Heart Near OAU Campus

After Compaore was unseated following an uprising in 2014, he fled to the neighbouring Ivory Coast where he was given citizenship.

The military tribunal that presided over the case handed jail terms ranging from three to 20 years to eight other suspects while acquitted three other defendants.