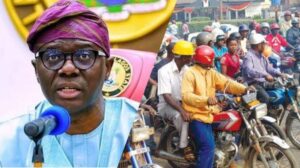 The Lagos State Government has banned the operation of commercial motorcycles popularly called Okada, in six Local Government Areas of the state.

Governor Babajide Sanwo-Olu made the announcement while briefing heads of security agencies in the state at a meeting at the State House, Ikeja on Wednesday.

The governor stated that the total ban on Okada in the six local councils takes effect from June 1, 2022, and would be fully enforced.

Sanwo-Olu pointed out that the ban in the six local councils is part of the phase banning okadas in the state.

According to Sanwo-Olu, the Local Council Development Areas (LCDAs) under the six local government areas would also be affected.

He, however, charged all Divisional Police Officers (DPOs), Area Commanders and the Taskforce to enforce the total ban from June 1.

“This is the phase banning we are going to be embarking on so that others know that in a short while, either they get out or get something else to do.

YOU MAY ALSO LIKE:   EPL clubs risk FIFA ban after blocking 60 players from World Cup qualifiers

“From the first of June, the LCDAs that are underneath them, we are going to publish them and list all of them, so we are giving the notice now.

“Begin to do your strategy now, from the first of June we want all the okadas to be completely off these major roads,” he said.

YOU MAY ALSO LIKE:   Meeting Davido Four Years Ago Has Made me Stopped Going to Church - Peruzzi
Sanwo-Olu Imposes Total Ban On Okada In Six Local Councils [Full List] 2022-05-18
Oluwasegun Adesuyi
Share