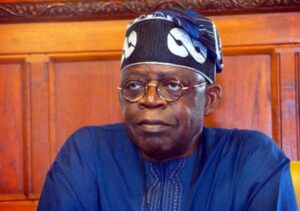 Although Tinubu has yet to make his aspiration public, the moves he has been making suggest he is interested in contesting the poll on the platform of the All Progressives Congress.

Adeyeye, who is a former spokesperson for the Afenifere, on Tuesday while inaugurating SWAGA in Gbongan, the headquarters of Aiyedaade Local Government Area of Osun State, said the Ooni of Ife, Oba Adeyeye Ogunwusi; the Alaafin of Oyo, Oba Lamidi Adeyemi; the Alake of Egbaland, Oba Gbadebo Adedotun and over 300 other monarchs in the South-West were routing for Tinubu.

Adeyeye said, “You are representatives of SWAGA and you must continue to advocate for Tinubu’s ambition. By God’s grace Tinubu will emerge as the president of this country in 2023.

“All the traditional rulers in Yoruba land are supporting Tinubu, over 300 of them are backing Tinubu including the Ooni of Ife, Alaafin of Oyo and Alake of Egbaland.

“They are stressing that he is the best candidate in Yorubaland to occupy the seat. Everybody is backing him. Asiwaju (Tinubu) will bring development to the country and Osun. You will all benefit from supporting him. Great things will happen in his time.”

Adeyeye, who is also a former spokesman for the Senate, said Tinubu was the right person for the job, saying as a highly detribalised politicians with proven track record of performance, he would bring his wealth of experience to bear to transform the country..

A former member House of Representatives/ SWAGA coordinator, Osun State, Mrs. Ayo Omidiran, urged SWAGA members in the state to work for the re-election of Governor Gboyega Oyetola, saying that would make Tinubu to win convincingly in the state and.beyond

YOU MAY ALSO LIKE:   'Tinubu Is A Father Figure To Me' - Faleke Denies Insulting Apc National Leader
See All Yoruba Obas Supporting Tinubu For 2023 Presidency 2021-11-16
Oluwasegun Adesuyi
Share