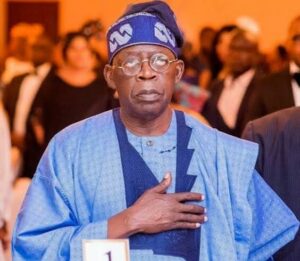 Although the National Leader of All Progressives Congress (APC) Asiwaju Bola Tinubu has not declared intention to contest any office in 2023, there have been different political movements mobilising support for him to join the 2023 presidential race.

Over the past few months, the ex- Lagos Governor’s campaign posters have surfaced in parts of Nigeria, the UK and the US.

Arguably, Tinubu commands a huge support base with his cult of followers, political loyalists growing daily.

He is also believed to enjoy the support of a broad spectrum of traditional rulers across the country, some of whom conferred him with honorary chieftaincy titles in appreciation for his philanthropy.

Prominent persons, including ex-lawmakers, Ministers and other politicians are campaigning for Tinubu to become President in 2023.

The Nation’s checks show that over 120 support groups, especially on social media platforms are promoting the presidential ambition of Tinubu.

Here is a list of prominent personalities, groups who’ve ‘publicly declared’ support for the Tinubu presidency in 2023:

Chidari said Kano State, which has the highest number of voters and delegates in the country, would repay Tinubu’s act of helping President Buhari, to become President in 2015.

2. James Faleke — Faleke who is member of the House of Representatives, has also asked Tinubu to run for president in 2023.

Read Also: Nigerians in Diaspora back Tinubu for 2023
He said Tinubu left office in 2007 but remains popular to date because “he is focused, consistent and persistent”.

3. Senator Adesoji Akanbi — Former Oyo South Senator, Adesoji Akanbi, affirmed that Tinubu remains the ultimate pathfinder, who is proactive and a problem solver for the next political dispensation.

6. Mudashiru Obasa – Lagos Speaker Mudashiru Obasa on behalf of the Conference of Speakers, said the speakers have pledged their support for Tinubu Presidency at a meeting held in Kano.

YOU MAY ALSO LIKE:   25 Years After, Inec Increases Number of Polling Units Nationwide

Zaura said he is prepared to “fight with all his strength and last kobo” for Tinubu to be president of Nigeria in the next election.

8. Joe Igbokwe — A chieftain of the All Progressives Congress (APC), Joe Igbokwe described the former Lagos State governor as a builder who laid the foundation for the growth of the state. said things would be okay if Tinubu becomes Nigeria’s president

9. Oluwo of Iwo in Osun State, Oba Abdulrasheed Akanbi – The Iwo monarch described Tinubu as the most qualified to succeed President Muhammadu Buhari in 2023.

10. Senator Abu Ibrahim – A former deputy Minority Chief Whip of the Senate and stalwart of the APC from Katsina State, Senator Abu Ibrahim, has also canvassed for support for Tinubu. He spoke during the inauguration of Bola Tinubu Support Organisation (BTSO) held in Abuja, saying he could vouch for him having known the former governor for two decades.

12. Tinubu Support Group (TSG) — The group has called on Nigerians to support the group to ensure the actualisation of a Bola Tinubu presidency in 2023 for a new and better Nigeria.

13. Nigeria Diasporans for Asiwaju Worldwide – The group has said the country stands a better chance of being transformed under a Tinubu Presidency.

YOU MAY ALSO LIKE:   Fresh Crises In APC As Party Leaders Reject Tinubu As Presidential Candidate Over Health Condition

14. Southwest Agenda 2023 group — The group has assured Tinubu of 12 to 13 million votes, ahead of the 2023 presidential election. It has also intensified its sensitisation, consultation and mobilisation tour in the state.

15. Disciples of Jagaban (DOJ) – The pro-Tinubu group, has said that it wants the National Leader of APC to succeed President Muhammadu Buhari as president in the 2023 general elections stating that Tinubu remains the most courageous and a staunch democrat that cannot be manipulated by Nigerian crooks.

16. The Ahmed Bola Tinubu Support Group – This is another prominent group promoting Tinubu’s presidential ambition. The group, located in Stuttgart, Germany, was created on May 29, 2020 and its Facebook profile says it has 12,000 members.

17. Northern Region Supports Tinubu 2023 for President (NRST-23) — This group, is led by its national Coordinator, Hon. Dahiru Hamma Dikko, where it has reiterated the need for all to help deepen the lifespan of Nigeria’s democracy beyond 2023 by rallying round Tinubu’s presidential aspirations.

18. Speakers of States’ Houses of Assemblies from North-west – The Speakers forum endorsed Tinubu, for president in the 2023 general election.

19. The Forum of Political Parties – The Lagos-based forum on Saturday threw its weight behind Tinubu, for the 2023 presidential race. The forum consists of political parties (registered and de-registered) in Lagos State.