See What Igbo Leaders Demanded From Buhari During Imo Meeting 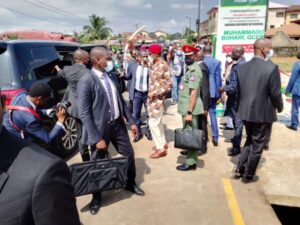 See What Igbo Leaders Demanded From Buhari During Imo Meeting

Details of the discussions between President Muhammadu Buhari and community as well as political leaders of the southeastern people on Thursday have emerged.

The Igbo leaders expressed their minds and made some demands from Buhari during the closed-door meeting held during the President’s visit to Imo State.

As earlier reported by this online news platform, journalists were shut out from the meeting which held at the newly commissioned ultra modern executive chambers at the Imo Government House, Owerri.

In attendance at the parley include the Ebonyi State Governor, David Umahi, and the Abia State Deputy Governor, Ude Okechukwu.

Others present at the closed-door meeting include the President General of Ohanaeze Ndigbo Worldwide, Prof George Obiozor; Minister of Foreign Affairs, Geoffrey Onyema; Minister of state Chief Uche Ogar: and other leaders of the All Progressives Congress (APC) in Imo and the southeast.

Reports have it that the President of Ohanaeze Ndigbo, George Obiozor told Buhari that Igbos don’t want to be treated as second-class citizens in their own country.

He said if the government addresses the feeling of been left out of governance which gets rubbed in their faces many a time, the agitations coming from the zone to break away from Nigeria will be curbed.

President Buhari during the meeting was said to have assured the delegates of an inclusive government and promised to complete the second Niger Bridge and other major projects in the region.