Senate In Closed-Door Session Over Ekweremadu, Despatches Delegation To UK 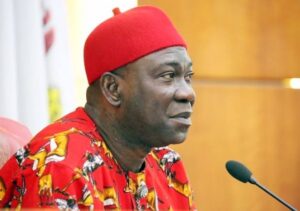 The Nigerian Senate on Wednesday went into a closed-door session over the organ harvest controversy involving the erstwhile deputy senate president, Ike Ekweremadu.

While the Federal Government has defended the issuance of visa and other required documents to the alleged victim, David Ukpo, the Senate has moved a stepped further to identify with one of its own.

Ekweremadu, who is serving a fourth time in the Senate, was incarcerated in the UK last week on allegation of trying to illegally obtained body organ from David, who has been deemed to be underaged.

Announcing the decision of the Senate after emerging from the closed-door session, President of the Senate, Ahmad Lawan, disclosed that the delegation comprised of members of the Senate Committee on Foreign Affairs.

The delegation, according to him, will leave for London on Friday.

He mandated the committee to engage the British High Commission in Nigeria to get more details on the case before jetting out.

Lawan revealed that the Nigerian Minister of Foreign Affairs, Geoffrey Onyeama, has been engaged for necessary diplomatic support to Ekweremadu and his wife, Beatrice.

He however said not much could be discussed on the matter as it was already in court, assuring Ekweremadu’s family and Nigerians that the Senate will continue to engage the Foreign ministry and Nigerian High Commission in London on the case.

YOU MAY ALSO LIKE:   'You Are Mentally Sick And Possessed' - Odumeje Fires back At Reverend Okotie For Attacking Late TB Joshua (VIDEO)

While urging all relevant government institutions, including the foreign ministry, to continue to provide the required support to the former Deputy Senate President and his wife, he promised that there will be justice and fairness in the end.

Ekweremadu and his wife have been remanded till July 7, their next day to appear in court while David has been placed in protective custody.

YOU MAY ALSO LIKE:   Panic As Unknown Person Dumps Coffin at FUTO gate
Despatches Delegation To UK Senate In Closed-Door Session Over Ekweremadu 2022-06-29
Oluwasegun Adesuyi
Share