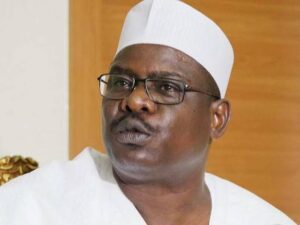 It was gathered that trouble started after Senator Ali Ndume, who is the Director-General of Rotimi Amaechi Presidential Campaign, had a meeting with delegates at the local government ahead of the primaries of the All Progressives Congress (APC) in Borno.

YOU MAY ALSO LIKE:   NDLEA Dragged For Appointing MC Oluomo As Ambassador

“We started hearing people screaming and shouting. When we ran to the scene, the gate of the lodge was already down and a lot of women were injured. We also saw other thugs and supporters of the Senator being taken to the hospital in Biu,” Usman Miringa, an eyewitness told Daily post.

About 32 people who sustained various degrees of injuries after the clash were rushed to the General Hospital in Biu.

“Yes. We have received injured persons. They are 32 in number. We also learnt that there are 16 others taken to a private hospital in Biu,” a source said.

According to a Biu resident, clashes occur whenever Ndume, who is seeking to return to the senate for the third term, comes to Biu for political activities.

The resident said: “This is not the first time such clash is happening. It usually happens whenever Ndume comes around for political activities. We do not know why.”