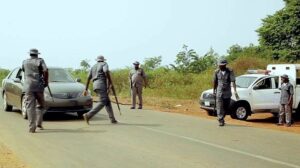 Seven people are suspected to have been killed, while others have sustained injuries in a gunfight between operatives of the Nigeria Customs Service(NCS) and smugglers in Ogun state.

The Custom operatives from the Federal Operation Unit (FOU) were on routine duties when they stopped some vehicles the smugglers were using to convey large quantities of foreign rice to an unknown destination.

The goods were seized and one of the drivers was arrested. A source told newsmen that things turned sour when the Custom operatives refused to collect bribes from the smugglers while also declining to let the driver go.

The refusal to collect bribes made the smugglers angry thus the fight began and both sides suffered losses. It took the intervention of the Nigerian Army and police to diffuse the situation.

The Public Relations Officer, FOU Zone A, Theophilus Duniya revealed that two of the smugglers lost their lives in the gunfight while two custom operatives were injured.

He said: “Customs patrol team from Federal Operations Unit Zone A, Lagos was attacked without provocation on Saturday afternoon during an operation along Shagamu Inter-change in Ogun State.

“The patrol team had intercepted twelve vehicles of different kinds, laden with bags of foreign parboiled rice and were on their way to the government warehouse before smugglers mobilized themselves with the support of their sympathizers and attacked the team with dangerous weapons.

YOU MAY ALSO LIKE:   We Are Not After Northerners, IPOB Tells Gumi

“During the exchange of gun fire, two of the attackers lost their lives and one suspect was arrested. Out of 12 vehicles in the convoy of the smugglers , our operatives were able to leave with 4 of them laden with smuggled foreign parboiled rice

“The arrested suspect and the seizure have been brought to the Unit Headquarters, Ikeja”.