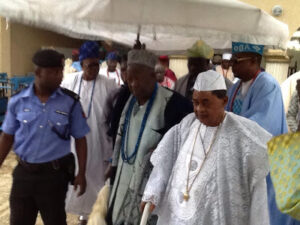 Two prominent traditional rulers in Oyo State, the Alaafin of Oyo, Oba Lamidi Olayiwola Adeyemi III, and the Olubadan of Ibadanland, Oba Saliu Akanmu Adetunji were surprisingly unable to gain entrance during the commissioning of the renovated Lekan Salami Stadium, Adamasingba in Ibadan.

It was reported that security agents on duty during the event which took place on Wednesday in Oyo State, prevented the traditional rulers from entering the event venue despite the Very Important Personality (VIP) Invitation Cards with them.

The traditional rulers later left the venue without attending the event following the incident with the security operatives.

The media aides of the two monarchs confirmed the development as earlier reported by Naija News.

But reacting to the incident, the Oyo State government on Thursday in a statement by the Chief Press Secretary to Governor Seyi Makinde, Taiwo Adisa said the traditional rulers were duly invited and expected at the event.

On why they were however unable to gain entry, the statement explained that the royal fathers were unable to access the designated VVIP Drop Off zone due to the surging crowd that turned out for the event.

It added that the security operatives told them to make use of another gate and noted that the state government holds the two traditional rulers in the highest esteem.

The statement reads in part: “What happened was that security operatives advised that the drivers of the revered monarchs make their way through another gate, since their convoys were unable to access the VVIP Drop Off Zone from the gate they entered through.

“From the VVIP Drop Off Zone, it would be easy for the monarchs to access the VVIP box without meandering through the stairs, as that would have unduly stressed them given their age,” he said.

YOU MAY ALSO LIKE:   Daddy Freeze, Peter Okoye React As Ugandan Pastor Celebrates T.B. Joshua’s Death With His Members

“His Excellency, Governor Seyi Makinde wishes to categorically state that the Alaafin and the Olubadan were well-expected at the event and that their seats were reserved.”

It added that the convoys of the monarchs were well treated and cautioned those spreading lies about what transpired on Wednesday to desist from such acts.

YOU MAY ALSO LIKE:   Press Release: ERA/FoEN Gets Acting Executive Director

“The government frowns on reports indicating that the convoys of the revered monarchs were not treated accordingly and would take appropriate steps to correct any untoward indication,” the statement added.

Previous 2023: Atiku will Only waste your Presidential Ticket – Group Warns PDP
Next ‘God Knows I Have Been Patient Enough’ – Annie Idibia Says As She Finally Breaks Up with TuFace For Sleeping With Ex-Girlfriend