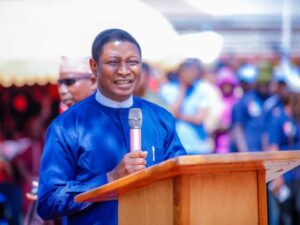 The Federal Government has adopted the Kingdom of Jordan as a new permanent Christian pilgrimage destination.
The Executive Secretary of the Nigerian Christian Pilgrims Commission (NCPC), Reverend Yakubu Pam, disclosed this during a meeting with the Jordanian Minister of Tourism and Antiques, Nayef Alfayez.

A statement released by the NCPC media office on Monday quoted Pam as saying that the shift was meant to boost Nigeria’s relationship with the Arab nation.

YOU MAY ALSO LIKE:   JUST IN: Shiekh Gumi reveals Big Secret On Bandits, Killer Herdsmen Operation In Nigeria

It added that the shift would also focus on improving diplomatic relations with the Middle-East country in the areas of peace, tourism, agriculture and technology.

Speaking also, the Jordanian Minister, Alfayez, commended the federal government for considering and adding the holy sites in Jordan as viable pilgrimage destinations.

Alfayez explained that the peaceful co-existence between the Christians and the Muslims was the greatest value Jordan cherished as an Islamic nation.

In a remark, the Nigerian Ambassador to Jordan, Faruk Yabo, solicited more cooperation in the area of visa procurement to enable more Nigerians to have the opportunity to visit Jordan so as to strengthen the bilateral relationship between the two countries.