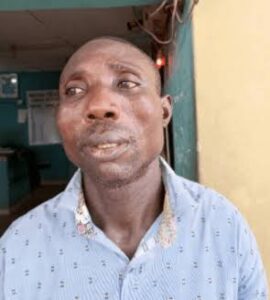 A 52-year-old man Adebayo Akinrinoye was on September 23rd arrested by men of Ogun state police command for unlawfully having carnal knowledge of his 16 year old daughter (name withheld).

The suspect, a resident of no 11 Kabiru close, Matogun Agbado Ogun state was arrested following a report via a written petition brought to Agbado divisional headquarters by the victim.

In the petition, the victim alleged that her father had been sexually abusing her since she was 14. She stated further that all her efforts to stop her father from this ignoble act fell on his dead ear hence her report.

Upon the report, the Dpo Agbado division csp Kehinde Kuranga quickly detailed his detectives to the scene where the suspect was promptly arrested.

On interrogation, the suspect confessed to the commission of the crime but pleaded for forgiveness from his daughter.

Uncover the identity behind every number that calls you.

YOU MAY ALSO LIKE:   NSA Monguno Under Fire As He Goofs Again
Shocking! 52-Year-Old Man Arrested For Defiling Biological Daughter In Ogun (Photo) 2021-10-02
Oluwasegun Adesuyi
Share

Previous Zoning may leave us with useless presidential candidates in 2023 – Sanusi
Next APC postpones Anambra campaign in honour of Akunyili, others