Shocking! Family Of Seven Found Dead After Eating Suya with Juice In Abia 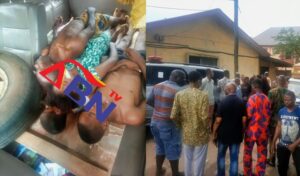 Shocking! Family Of Seven Found Dead After Eating Suya with Juice In Abia

No fewer than seven persons have been confirmed dead after eating the popular barbecue known as suya with juice in Umueze Umuakanu Umuahia North LGA, Abia State, ABN TV reports.

Father of the house Mr. Jessey was said to have bought the suya from where all the family members, including extended family who came for holidays ate.

ABN TV gathered that only the Wife Mrs Ogba Jessey, and his son survived.

She is currently receiving treatment at Federal Medical Centre Umuahia.

Our correspondent gathered that she is not aware that other members of the family have passed on.

They were said to have started throwing up after eating the suya suspected to have been poisoned.

The deceased have been deposited in the morgue while the surviving victims are currently receiving treatment.

YOU MAY ALSO LIKE:   Ritualists gang rape 50-year-old woman, remove her eyes and private parts in Delta
Shocking! Family Of Seven Found Dead After Eating Suya with Juice In Abia 2021-08-25
Oluwasegun Adesuyi
Share