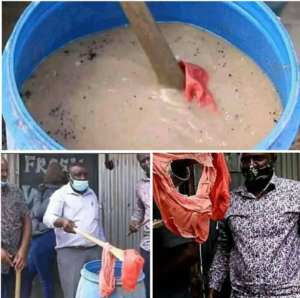 One of the most popular traditional drinks being consumed is most parts of Northern Nigeria is Kunu.

Mostly sold together with bread or egg rolls, chilled Kunu is very pleasing more especially when one is very hungry and feeling thirsty at the same time, perhaps that’s why people fancy it very much.

Reports coming from an online news, worldgisting has it that, a woman in Kaduna whose name is unknown normally  sells Kunu to the public and was caught using her old underwear in the process of making the Kunu.

It was gathered by the worldgisting newspaper that, the woman was caught by the agents of the consumer protection council with the aid of some people close to her.

YOU MAY ALSO LIKE:   Armed Herdsmen Invade Lagos...Chase Epe Land-Owners with Gun

The woman was said to have been making the Kunu drink in a very huge quantity and hundreds of people patronizes her product on daily basis without knowing how the process of making the drink is taking place.

It therefore very important for people to be making sure that traditionally made drinks they buy are of good quality and are made in a hygienic way.

The woman is currently in the police custody and will be presented before court after investigation.