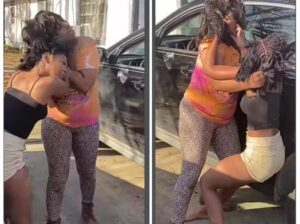 In the street of America, two ladies had engaged in a fight in an argument over a man. The pictures and video which were shared on social media show two black American women fight dirty and physical.

It was learned that the fight started as a result of a misunderstanding between the two ladies over the same man who they fell in love with at the shopping mall.

YOU MAY ALSO LIKE:   Sight & Sound of Regina Daniels Nwoko Birthday Bash in Dubai

This is not only ridiculous but disgraceful. People should learn decorum and self-control in public. This is an avoidable mistake on the side of the ladies. As a lady, how can you engage in a fight over a man you both newly met at a shopping mall the same day? The man has gone and the two are killing themselves over him. Lessons should be learned. Respect and self-dignity are supposed to be the watchword.

This fight began seriously between the two ladies without anybody knowing the born of contention. Some ladies tried to settle the issue but no way.

That is what happens when there is no self-discipline. There are many lessons to learn from here. Respect and high self-esteem can make one of them walk away at the heat of the argument. This is not limited to ladies, men also engage in such shame and displays and even more bloody at times.