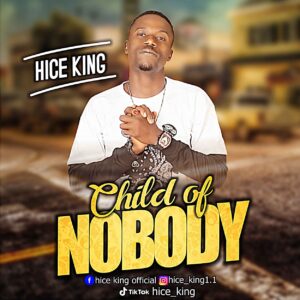 Sensational singer and songwriter Hice King is gradually putting his feet down in the Nigerian music industry, born Okon Samuel Monday, in Uyo LGA of Akwa-Ibom State, he sojourn to Lagos began when he lost his late grandparents who trained him since he was a baby in a little farming village in Cross-Rivers State.

According to the budding music star his relocation to Lagos was not as smooth as he had expected, in his words “When I moved to Lagos I was only able to work for 7 months and since then it has been very difficult to get another job, it was very tough as accommodation and feeding were just by the grace of God.

YOU MAY ALSO LIKE:   6 confirmed dead in Lagos building collapse

“I was sleeping from one church member’s house to another and whenever that is not possible I will sleep either in an uncompleted building or under bridge, friends and families could not help as it was generally tough, it got to an extent that I begin to lose hope in myself. It was all that I am facing that gave me the inspiration behind the song ‘Child of Nobody’ which is to explain the kind of hardship I had faced and ones that I am still facing”. He explained.

The new song is an easy sing along song which talks about the hardship on day to of every young men aspiring to make ends meet, it is full of positive talks and thought. it is currently available on all music streaming sites and app and the last check shows that the stream for it is gradually climbing up.