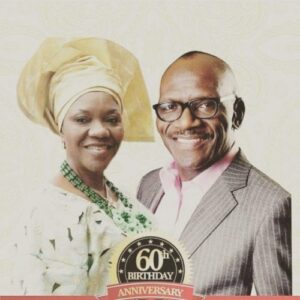 The death of Hassan was confirmed by Odukoya’s daughter via her Facebook page.

She wrote: “My Dearest Aunty K, my birthing partner and one of my closest aunties…

“You were always there for me when I needed my mother the most.

“You held my hand and encouraged me…

“To say I will miss you is such an understatement.

YOU MAY ALSO LIKE:   Men are Easily Attracted to Me but I Don’t Get Carried Away- Islamic Singer, Ewa Islam

According to available information, Hassan died of complications from cancer on Thursday the

It has been a very challenging and painful year for the amiable Man of God.

This year 2021 was the 16th anniversary of the passage of his beloved first wife, Pastor Bimbo Odukoya in an ill-fated Sosoliso flight of 2005.

In November of the same year, the Pastor also lost his second wife, Pastor Nomthi Odukoya after a protracted illness she fought for almost two years.

The 47-year old mother of 2 was married to the famous preacher for 11 years before the cold hands of death snatched her away.

As she was just getting over the devastating loss of his better half, the sad news of the passing of his twin sister (Kehinde) at the age of 65 filtered in.

YOU MAY ALSO LIKE:   Cyber crime: 70% of Nigerian Youths May Soon Become Ex-convicts - EFCC Reveals