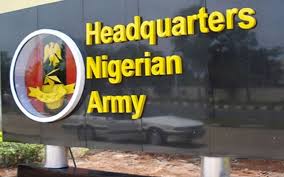 A soldier whose name cannot be confirmed from the 22 Armoured Brigade of the Nigeria Army, Sobi Cantonment, Ilorin, Kwara State has reportedly beaten a female nurse to the extent of breaking one of her legs.

The incident, it was gathered, happened over the weekend when the soldier took his pregnant wife to the hospital for delivery.

Sources told Daily Trust that trouble started when the nurse asked them to buy delivery packs upon admitting the soldier’s wife into the labour room.

“Instead of looking for the delivery packs, the soldier rejected the demand arguing that the state government has provided such items for pregnant women that might have come for their delivery at the hospital.

“But, the statement got the soldier angry and beat the nurse to the extent that one of her legs was broken”, another source added.

The development led to the admission of the nurse who is currently receiving medical attention at the hospital.

YOU MAY ALSO LIKE:   INEC Set to resume voter registration June 28

He said that the authority of the Cantonment has detained the Army officer in the guard room for further interrogation on the matter.