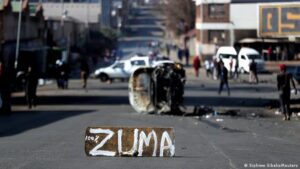 Residents clean rubble and debris from the streets in Alexandra township after protests and unrest linked to the jailing of former President Jacob Zuma, in Johannesburg, South Africa. © Reuters

The death toll from violent protests in South Africa has risen to 117 with more than 2,000 arrests.

Days of unrest have left a trail of devastation in KwaZulu-Natal and Gauteng provinces, with officials saying 800 retailers have been targeted.

Several clinics and schools have also been vandalised.

During clean-up operations in streets and shopping centres on Thursday, more bodies were discovered.

But authorities are confident that they have turned the corner in dealing with the mayhem.

An additional 5,000 soldiers were deployed on Thursday – to join the 2,500 deployed on Monday.

YOU MAY ALSO LIKE:   Senate Queries NECO over Alleged Award of N6.5bn Contracts Without Due Process

Johannesburg, the main city in Gauteng, is relatively calm, though the threat is far from over.

The BBC has seen vigilante groups there working with police to guard their local malls as looters mobilised themselves in the distance.

YOU MAY ALSO LIKE:   Zedcrest Group Celebrates Customer Service Week