Sunday Igboho: No Election In Yorubaland In 2022 – Prof. Akintoye 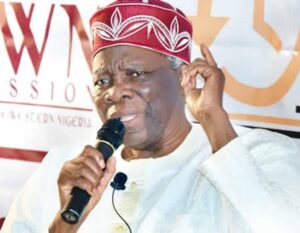 The leader of Ilana Omo Oodua Worldwide, a Yoruba self-determination group, Professor Banji Akintoye, has said no election will be allowed to hold in the southwest in 2022.
In a statement on Friday, Akintoye expressed hope for the quick release of Yoruba agitator, Sunday Igboho Adeyemo, who is in detention in Benin Republic.

The historian urged the supporters of the youth leader to remain hopeful, adding that Yoruba nation will be achieved soon.

YOU MAY ALSO LIKE:   After Defecting To APC: Governor Matawalle Sacks All Special Advisers

He said: “I am sure that all Yoruba people everywhere are expecting me to make a statement about our dear hero, Chief Sunday Adeyemo. How I wish I could announce now that he has been released.

“Unfortunately, we are not blessed with that wonderful news today. But I join all Yoruba patriots everywhere in the fervent hope that he will soon be released.

“Among most Yoruba self determination advocates worldwide, the determination exists and is growing that there shall be no state governorship and house of assembly elections in our homeland in 2022. The next election that we Yoruba people will engage in will be the first election in our own new country.”

Tags Sunday Igboho: No Election In Yorubaland In 2022 – Prof. Akintoye