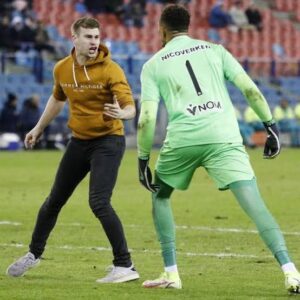 Maduka Okoye, Super Eagles goalkeeper was during Friday’s Dutch league match between his club, Sparta Rotterdam, and Vitesse Arnhem attacked by an angry fan.
This came after a middle-sized spectator broke into the pitch and approached Okoye’s penalty area, but the 23-year-old goalkeeper chased the invader, by gesturing authoritatively for him to get off the pitch.

The 23-year-old goalkeeper was also hit by an object from the angry Vitesse home crowd, but Okoye still put up a man-of-the-match performance by saving a penalty to maintain Rotterdam’s 1 nil lead.

YOU MAY ALSO LIKE:   Regina Daniel, Jaruma Tear Each Other Apart Over Love Enhancement Product "Kayamata"

Maduka’s attack comes weeks after the goalkeeper’s team, lost out of AFCON 2021 after losing to Tunisia.

Following the violent behaviour of Vitesse Arnhem’s fans, the centre referee ended the match before the seven minutes injury time was exhausted.

The league’s governing body, issued a statement revealing that the match was discontinued due to multiple crowd troubles, including the use of flares.

The league body also noted that an investigation will be initiated and a decision taken on the result of the match.

“The match between Vitesse and Sparta has been discontinued tonight (March 4, 2022) at a 0-1 score due to fireworks from the (home) public,” the league body said.

“This was done after consultation of the referee with both clubs. The incident will now be investigated by the disciplinary committee.”

YOU MAY ALSO LIKE:   Unveiling! Dog and Cats that are Richer than Davido and Wizkid and others
Maduka Okoye Attacked Weeks After AFCON Super Eagles Goalkeeper 2022-03-06
Oluwasegun Adesuyi
Share

Previous JUST IN:Lagos Seals Event Centre Where Petrol Was Shared As Souvenirs
Next ‘Do Not Compare Davido And Wizkid’ – Portable Speaks After davido sold out 02 Arena