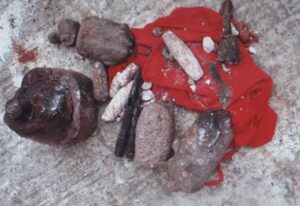 An unnamed sex worker was reportedly hit with charm by a suspected ritualist at a hotel in Osogbo, the Osun State capital.

The sex worker was said to have been picked at a hotel by three men who requested that she should have a foursome with them.

The lady reportedly turned down the request and said she could only have sex with two of the men at the same time.

While still negotiating the price and the modus operandi, one of the men was said to have hit the lady with a charm and she was hypnotised and started vomiting blood.

The Field Commander of Amotekun Corps in Osun State, Amitolu Shitu, confirned the incident to journalists on Sunday.

The Amotekun boss said he personally led the team that visited the scene the day the incident happened before the lady started vomiting blood.

He said, “The lady told me she was living with an Indigene of Sagamu, Ogun State at the Ofatedo area.

“She mentioned one Becky as her friend. She said three men had picked her from another hotel in Ofatedo and took her to a hotel around West Bye Pass.

YOU MAY ALSO LIKE:   Ecobank Set To Host 2nd AgriBusiness and Food Security Summit

“At the hotel, they told her she would have sex with three of them at the same time, but the lady said she told them she could only have sex with two men

“While arguing with one of the men, the suspected ritualist hit the lady with charm on the head and she became almost unconscious. She was still talking to me when she started vomiting blood.

YOU MAY ALSO LIKE:   Joshua Iginla, US medical Team embark on Free healthcare for all

“It was late and I asked the night guard working in the area to watch over her, while I made an arrangement for an ambulance. By the time I returned to the scene, I was told that her friend, Becky she told me about had brought a bus to pick her and took her away.”