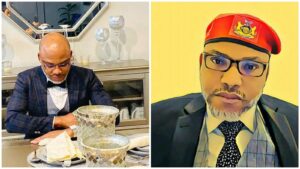 IPOB leader, Mazi Nnamdi Kanu, has blown hot during his Biafra podcast yesterday. During his podcast, he reacted to President Muhammadu Buhari not being able to attend Ibrahim Attahiru’s burial.

Recall that President Muhammadu Buhari was trolled on social media by Nigerians over failure to attend the burial ceremony of Chief Of Army Staff and 10 other military officers who died in a BEACHCRAFT350 aircraft crash on Friday May 21, 2021.

YOU MAY ALSO LIKE:   Millionaires Emerge in UBA Savings Promo as 10 Customers win N1m Each

During the Biafra podcast, Nnamdi referred to President Buhari as the dead, and says “The dead can’t bury the dead.” He ended that part by saying if the real President Buhari was alive, he would have attended the funeral.

He said: “A general died and a general didn’t attend his burial?” The dead can’t bury the dead. The real Buhari would have gone for the burial if only he was alive.”

Previous “I stole plantains to raise N10k for my girlfriend‘s makeup” — Suspect
Next Lagos Assembly: Bill to stop past Govs Pension in Lagos scale second reading