Home / cover /  “The game has started, I will make you loose weight”.  – Wike replies Edo Governor

“The game has started, I will make you loose weight”.  – Wike replies Edo Governor 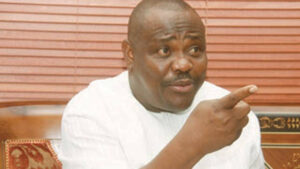 The war of words between Rivers State governor, Nyesom Wike and his Edo State counterpart, Godwin Obaseki, continued on Monday with the former recounting how he made the latter governor.

Wike, whose reply came after Obaseki’s full advertorial accusing him of being a bully and domineering force within the PDP.

But while commissioning the Community Secondary School, Omuanwa, in Ikwerre Local Government Area of the state on Monday, said, even though Dr. Abiye Sekibo told him not to reply Obaseki, he said “No, I will reply him, I’m a politician,” and went all gun blazing on Obaseki.

Speaking on Obaseki, he said, “Obaseki said I’m a bully, but he came to beg a bully for ticket, a bully was his campaign DG, and a bully bullied him into Edo state government house.

“It didn’t end there, he still came back with his wife to thank the bully after the election.

“I slept in Edo State for three days just to deliver Obaseki, but today, I’m a bully.

“If you check the DNA of Obaseki, what you’ll see is betrayal, serial betrayal and ungratefulness.

YOU MAY ALSO LIKE:   Good News for Nigeria, Saudi Fire could Force Oil Price to $100

“Rivers State is one of the few states that had voted PDP since 1999, we have invested in the party.

“You’re a tenant in PDP, I have more stake in PDP than you.

“I challenge you to come and cause crisis in Rivers State, then you’ll know who is who.

“Obaseki, I know your cohorts, I will smoke all of you out.

“Obaseki, I challenge you to defect back to the APC, we’ll shave your head.

“I know those using you, if I decide to run for President, I will win all of you.

“The game has started, I will make you loose weight.

YOU MAY ALSO LIKE:   Gen. Akinrinade retd, Commends Chief of Army Staff for Defending Democracy
“The game has started I will make you loose weight".  - Wike replies Edo Governor 2022-03-14
Oluwasegun Adesuyi
Share

Tags “The game has started I will make you loose weight".  - Wike replies Edo Governor

Previous Don’t Give Up On Your Health – Doyin Okupe Advises Kemi Afolabi
Next 2023: Why Tinubu will be APC flagbearer – Top party member