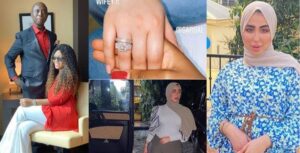 Against the trending misinformation that billionaire philanthropic businessman Prince Ned Nwoko is taking a new wife based on the picture and videos on Instastory of a UK based Sara, we can tell you for free that nothing of such is in the offing.

Story broke-out recently that Prince Ned Nwoko, who just recently welcome a bundle of joy from his beautiful screen goddess wife Regina Daniels-Nwoko, is planning to marry a new wife by the name Sara or “Sar8al” on Instagram, but in a response to our query one of Delta State born billionaire’s aide revealed that the whole story is figment of some mischievous people’s imagination, in a chat with Society Gazette, it was revealed that the lady in question is a sister to Jasmine, one of Regina’s assistants.

YOU MAY ALSO LIKE:   COAS FELICITATES WITH OFFICERS, SOLDIERS, FAMILIES ON ARMED FORCES REMEMBRANCE DAY CELEBRATION 2022...Assures of care for the injured

We were informed that the lady followed Regina from U.K and she’s at the moment her guest, living with her at their home and she has no link to the Delta Prince in the way people are insinuating. The aide in his words further explained “Prince is not somebody who will do things like that in secrecy, he’s from a Royal family and has nothing to do with the lady, she was brought from UK by Regina as she worked for her when she was over there.

“She’s Jasmine’s sister and the rumor is bore out of the fact that Regina has been sharing her pictures and videos on her social media especially the one where she flaunted a supposed engagement ring with the caption “Wifey”, this must have set the tone of the rumor that she’s engaged to Prince Ned Nwoko, coupled with the fact she has been posting a lot of pictures with Regina’s cars and the house.” He concluded.