This Election Is Ize-Iyamu’s to Lose by Ifeanyi Nwaneri 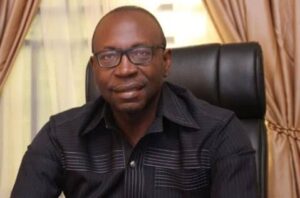 Amidst the din and disgrace that heralded Governor Godwin Obaseki of Edo State and his high profile guests into the palace of the Oba of Benin, Omo N’Oba N’Edo Uku’ Akpolokpolo Ewuare II, Saturday, July 25th, as part of his second term electioneering, some voices echoed loudest; they were that the governor is a total failure and an irredeemable liar.

Echoes of ‘Obaseki, Ole (thief)’ reverberated around the hallowed grounds of the ancient kingdom. These were not paid thugs at a random political rally; they were the voices of everyday indigenes and subjects at the palace of a most revered king and father of the state.

The people of Edo State idolise their King, as such, if they were not harried and frustrated with Obaseki and his administration, they would not have chosen the Oba’s palace to vent their anger, frustration and disappointment. So, the shared sentiments could never have been bought. Interestingly, what happened last Saturday was not an isolated case.

In September 2019, while attending the 74th United Nations General Assembly (UNGA) in New York, United States of America, alongside other governors and government officials, Obaseki, on his way into the venue, was heckled and booed by disgruntled natives, who had laid siege to him.

They hurled expletives at him for his below-par performance in office while chanting, yet again, ‘Ole’. The video of the embarrassment made the rounds on the social media for several days.

It is instructive, therefore, that the ignominious welcome of the governor and his Peoples Democratic Party, PDP, acolytes, was a ringing testament to how badly the people want him out of the Government House.

And, they cannot be blamed. This was a governor that they unanimously voted for just four years ago with the mandate to take the state further than his predecessor, the intrepid Comrade Adams Oshiomole. Oshiomole had set the state on a path to prosperity, as many acknowledge across the state and beyond.

Obaseki was just supposed to build on the legacy of his predecessor. However, he whimsically derailed and plunged the state into retrogression, while battling his benefactors and depriving the people of quality governance.

YOU MAY ALSO LIKE:   Sex Work Made Me A Better Mum Than Church Upbringing – Pastor Turned Stripper Says

The widespread opinion in the state is that the people have not had it so bad in terms of his reprobate and regressive leadership. From Egor to Etsako, Agenebode to Auchi and everywhere in between, it is the same story of Obaseki’s underwhelming performance, promotion of insecurity, brigandage, unemployment and divisive politics.
Largely deemed to be suffering from a narcissistic personality disorder, Obaseki, the people of Edo believe, has evolved into an imperious and intolerant governor. It is either his way or the highway. Now, the chickens have come home to roost.

The people of Edo State are on a mission to rewrite their narrative by pitching their tents with a man they affirm understands their plights and what needs to be done to better their lots from the first day in office. So, Pastor Osagie Ize-Iyamu, candidate of the All Progressives Congress, APC, in the September 19th governorship election has his work cut out for him.

Beyond his pastoral calling and heritage, and meritorious service to the state since 1999, Ize-Iyamu is widely popular and seen as very grounded.

The people reckon that more than the incumbent governor, who lost the plot long ago and has seen his administration careening to the craters, Ize-Iyamu understands, where the shoe pinches them and has the personal and political resolve and readiness to right the wrongs of Obaseki. What has further convinced the people is his thoughtful and thorough blueprint for the development of the state aptly titled: ‘The Simple Agenda’, which by every definition a manifesto of hope.

YOU MAY ALSO LIKE:   Yahaya Bello Can’t Rule Even A Pig Farm – Deji Adeyanju

Therein, he clinically analysed the problems besetting the state and proffered practical and profound solutions. According to him, the potential of the state are huge in terms of the ability to attract tourists, investments and quality jobs, but the current security situation in the state makes the realisation of these potential unrealistic and unattainable.

“The state of insecurity assumed its peak, when Governor Godwin Obaseki cultivated and nurtured the habit of fanning the embers of divisive politics by making unguarded statements, particularly with words and phrases as ‘crush,’ and ‘my second term is non-negotiable.’

His determination to physically assault any fellow party faithful, who aspires to run for governor or is not willing to support his ambition has created a tense and volatile environment.”

To this, the APC candidate avers: “Edo State under our charge will build brand new security architecture,” Ize-Iyamu said, while also accusing the governor of failing to address the high rate of unemployment, which he posited had resulted in youth restiveness in the state.

“The unemployment situation largely accounts for the prevailing incidence of youth restiveness, which manifests in high rates of armed robbery, kidnapping, thuggery and cultism. Edo State is now literally a sanctuary for disgruntled youths, who invariably vent their frustration and anger over their social marginalisation of law-abiding and hardworking citizens,” he said.

He has also stated unequivocally that the dangerous situation in the state could only be reversed by a change in the leadership that would be tolerant of different views, accommodating and committed to peaceful engagement. And, the people believe him wholeheartedly.

In ‘The Simple Agenda’, Ize-Iyamu asserts that the change that the state requires is not premised on mere sloganeering or rhetoric, but contended that, “We have analysed the challenges facing our state, consulted widely across the 18 Local Government Areas, and based on the APC manifesto, we have come up with a robust blueprint to launch Edo State on the path to sustainable prosperity and holistic development.

“Ours is a genuine road map to transform our state from its present unacceptable condition of underdevelopment to an attractive state with a vibrant economy.”

Indeed, the purpose of government is the pursuance of happiness for the greater majority of the people, which is why Pastor Ize-Iyamu has said his administration would strive to meet this purpose at all times, “and serve the needs of the good people of Edo State efficiently, effectively and fairly through good governance that is geared towards solving social problems in Edo State.”

However, if there was anything that has arguably established Obaseki’s clueless approach to governance and leadership, it was the fact that his trip to Lagos at the weekend where he met with newspapers operators of different categories was a waste.

Can you imagine a governor seeking re-election saying to media operators that he only came to thank them? Really? Thank them for what? He simply does not understand the issues and clearly unable to sell them. Never again will Edo walk the path of Obaseki in her political trajectory. It’s a definite goodbye to leadership misfortune.

@societygazette
Previous “I WAS WARNED TO NEVER WATCH TB JOSHUA BUT GOD USED HIM TO HEAL ME!” – MEDICAL DOCTOR
Next Access Bank Provides Financing Opportunity To Female SMEs Across Africa